I Forget to Spell Caravaggio, by Eben Wood

I saw that you were at Qumran. I could see it in your broad straw hat and keffiyeh, your military jacket, your aviator shades, your desert boots. You joined the outfit: all dressed up and no war to go. It’s become so common now, this kind of physical discipline, as if we all enlisted. As hot as the days are there, peeled open under the sun, it’s freezing at night, the kind of freeze that keeps you awake, even in your sleep.

So we locate memory in extreme opposites: hot and cold, day and night, here and there. In any case I was present, replacing one concussion with another. The caves at Qumran were ragged black eyes in the cliffs, grainy with humidity. Despite its name, the sea below the caves was anything but dead, even at night. It took the first morning light like mercury, alive with the counterfeit world. The sun came over a mirror image of hills, east to west across the border, west to east through the border’s mirror. The hills on one side were exactly the same as those on the opposite side, and reversed. As the sun progressed it lit up first one face and then the other, dragging shadows. The sea was between, binding the hills and driving them apart, along a blinding seam.

I don’t know where you were standing, looking at those caves and the cliffs and hillsides and the seas between. Yes, I said seas. Like all living things, dead in name only, it was plural, multiple. Lining the shore, the bombed hotels look like an ancient city, destroyed not by high explosives but by time. Wherever you were standing there, there were these things, grainy with humidity as the sea burned. The humidity and the quality it gave the air made the pale hills even paler. There is a ghost of distance. There really is nothing living in that gravel desert except creosote brush. Pinched between fingers it dissolves to ash. What is living is underground, as fugitive as water. You will have seen the fields I worked in, the fields from which I saw the sun come up and cross the seas between borders, one side rubbing against its opposite. You will have seen the date palms at Qalya that I also worked in, under the sharp scissors of their shadows. The wind snips. You will have seen the ripples and folds of the gravel desert as the sun ironed them out, driving the shadows inside. You will have seen the curve of highway down from the mountains, from the Holy City, white Jerusalem stone, running straight past the junction where you might go north to Jericho, to Galilee or the Allenby Bridge, or south past Qalya to Ein Gedi and the seas’ southern end, haunted by pillars of salt.

You will have seen these things in a single, short burst, secure in your uniform, webbed by the flight paths of swallows that live in the caves at Qumran. At dawn they breathe in and out. They murmur. I’m jealous of that, of the fact that you are there, or were, and that you held that short burst in a single impression, a flash of the senses. In my case there was duration. I lost control over a matter of weeks. I lost control of the flow, of time itself. That was a space of heavy detonations, sharper even than the sun coming up over Jordan, of the mercury sea, of the scissor-like shadows of the Qalya palms, snipped and snapped with the wind. The sun is a fist. It got me hard across the jaw, again and again. I stretched full length on the ground, soaked with the water of Galilee, fresh and ancient, and dug my fingers in. I gripped as hard as I could to each mercury burst, even as they were, over time, exactly what hit me, floored me, and burned my skin off as I gripped. There was no way to roll out from underneath that fire, to suffocate it, and so we locate memory, here and there.

But you know me, I bounce back. I know that none of what I’m describing was visible, even if you remembered the few images I gave to you. In one quick burst your senses were impressed, I’m sure. For one thing, you’re a believer. You found a place made of words. The Holy City and all that, the scripture rolled off the tongue, rolled and tied and sealed in clay jars. The Zealots were in hiding from the empire. This fit right in with what you already knew, the fact of the shepherd finding the jars as he looked for the lost of his flock. At the moment the jars were sealed their discovery was ordained, thrown into the loop of time. Scripture’s where we find it. The book is full of this kind of circular logic: something means something because it has this meaning. Haste you, escape thither; for I cannot do anything until you be come thither. Therefore the name of the city was called Zoar. These are the badlands of David. Here he hid, here he was king. It was in the river running straight between borders that John was baptized. What happened at the Monastery of Temptation happened because it is the Monastery. The tempter came to him and said, If you are the Son of God, tell these stones to become bread. The proof is as physical as your uniform. You can see all this merely by turning around, revolving on an axis opposite to that of the sun. You refuse. This is the machine that I lost control of in a matter of weeks. It was a demolition job like T.E. Lawrence might have planned and executed, jamming sticks of nitroglycerine into the differential. The differential is where two axes cross, two revolutions. This is the irony, considering it a machine when in fact it’s a body. Still there’s a possibility, some release from the snipping or snapping shut of memory. You get the nitro up in there and insert the detonator, that smaller and more aggressive charge. The cap. The flash of that small charge sets off the larger, triggers the real violence. It’s hard to pinpoint the exact moment, the point where the wheels really come off, where the gears of the machine grind themselves up with their own force, where stone becomes bread.

So we haven’t talked. Still, I saw that you were at Qumran. This is where I couldn’t remember how to spell Caravaggio. It wasn’t about the name anyway, which wasn’t even his. As counterfeit as the camouflage you wear. It was the name of a place that he occupied, and by that occupation was given its name. It was the blunt authenticity of his flesh, painted live, from living models: prostitutes, thieves, the poor and dissolute. I noticed how the white man said, my son is Ethiopian. My other son, he continued, is Latin American. This city reeks increasingly of that kind of thing. Make the flesh as true as you can, Caravaggio said, because then it’s the inauthentic gestures that you can see. The coy eyes like caves through grainy humidity. Dark, watchful. This is the condition of dissolution, of the tender precision of bodies struck and mortified by unforgiving conditions. The tenebrous.

Writing this to you, crossing mercury seas, I watched a man pass by carrying a pine tree on one shoulder. I was reminded of the walking forests, the drift of those symmetrical trees south from Quebec and Maine to these city streets. They are temporary, bad copies of the northeast forests in which I was born. Such times require that we consider this. The forests that have been cut from their trunks and hauled south to decorate this season of pagan rituals. This is far from what they might have imagined, the trees, trapped by their own roots in symmetrical grids. They were planted by hand in these grids, in these regular and disciplined rows, intended only for the streets of this unholy city. There were not born wild or free, they were planned, their lifespan ordained. They will gleam with tinsel, with added mercury, and shine with colored lights. Capped by stars, they will be bound to power outlets. This is the dead certainty, the absolute future that was written before their seed was split and forced through a green fuse.

My son is Ethiopian, the man said. My son is Latin American. There is already a jar and wax seal waiting, the lost of the flock, the shepherd. There is already a millennium of silence, and the swallows murmur. There is the moment opened by the shepherd, flesh and then flash, the exponential expansion of matter, heat and light, the elements. Entering the eye, evacuating everything. I’m stretched full length on the ground, soaked with the sweet water of Galilee, digging my fingers in. I’m letting the flash roll over my back, take the hair off my exposed skin, from my nostrils. My son is Ethiopian, my son is Latin American. This specific place shivers like the heat coming off the gravel desert in waves. The trees ignite, flames crawl up the walls. You were in Qumran and will return to the ruins, destroyed not by high explosives but by time. Like time, the fire consumes its own fuel in burning. What remains will smell of pine and distant violence, pale hills made paler by the air. They will be dry and silent. Unlike them, you will enter a new year.

In the meantime, I know, there will be Bethlehem. This is where I stepped on the head of a sleeping soldier when I got off the bus. He rolled over and cursed me, and so the occupation dreams. I saw the African bishop at stadium distance, in a moonlit field beyond the city walls. This was a heated pilgrimage, a pilgrimage not toward but away from the gesture of refusal. Apartheid was over, in the bishop’s country. There, in Bethlehem, it continues. We were in the West Bank. Shortly there would be ribbons of silver at night, Katyusha rockets fired from over the border, from the direction of Damascus. Morning converts these streams to the blinding seam of the seas. They were plural, multiple, and the desert unfolded itself. I was walled in by trees at that point, the wild sisters of those that walked south to these Brooklyn streets. I was training fire. It was training me. Bethlehem was the artificial star atop the pine crowns. It was a sleeping soldier’s head that I stepped on. It was the lilt and roll of the bishop’s voice through a bad sound system, under the crackle and hiss of night’s white fire. It was freezing. We were so far from home. I was desperately in love with nothing. I considered what was to come. It was one or nothing, the binary of solitude. A dark eye with mercury lids. A seam. What is both like and unlike the skin, melanin that reads its history in the sun.

It was his own head that he painted, hanging from David’s hand or just beginning its separation from the bent body of the Baptist, cheek to stone, while Salome waits with a golden platter. I’ve yet to parse the murmur of the swallows, black letters against the desert sky. At Qumran, still, the scripture continues. 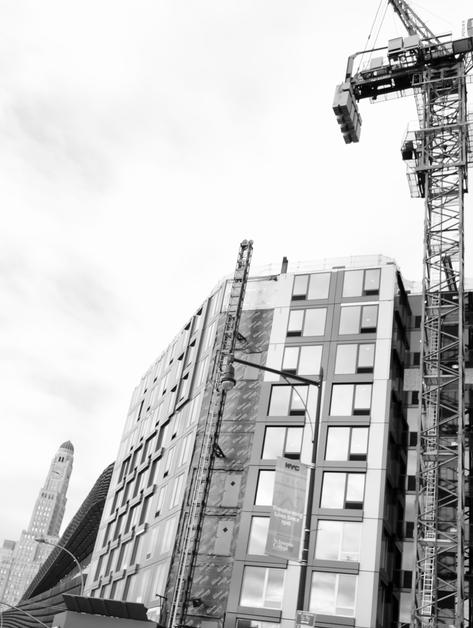