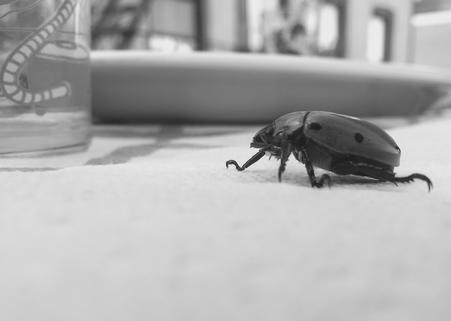 Eric Raanan Fischman is a Flatbush-born poet living in Colorado, where he received his MFA from Naropa University’s Jack Kerouac School. His first book, Mordy Gets Enlightened, was released last year through The Little Door at Lunamopolis. He occasionally teaches workshops for the Beyond Academia Free Skool in Nederland, and is currently working on a collaborative book of love poems with a fellow Hunter College grad.

Then there was the time I brought everyone
and the galaxy into the alternate reality to kiss you,
where Bush won twice and democracy was still fiction.
We wrote the novel of our love on a park bench
in Bensonhurst while the membranes between universes
passed through each other. The atmosphere burned
like orange streetlamps and everywhere the earth
churned and spit. Our lips were the nexus of all things,
pulling parked cars and red brick apartments into our orbit.
An asteroid could have vaporized the Atlantic, and we
wouldn't have noticed. We had stepped out of the river
of time to cut our own private tributary, one where
we fit perfectly, where we could breathe
the water. No one knew. Wall Street went on, oblivious
to our findings. We were the nucleus around which
atoms spun to their day jobs for minimum wage
and a half-hour unpaid lunch. It didn't matter. There were
unions here, like your hand in mine, the contract between
our eyes, a brand new world to destabilize together.