"Sifting on the Santa Shift," by LindaAnn LoSchiavo

​​​​​
In the dusty bottom of a box, a slim white lasso of a letter reaches out for me.

December gray hides the sky as clouds bunch up and coil down from the north. Icy leftover snow pocks New York City pavement, forcing you to glance down, at what you'd rather not see — — discarded, unwanted things underfoot — — until, at last, you’re sheltered from the immeasurable cold and  inside the main post office where good citizens come to respond to letters addressed to "The North Pole."
​

Here we are, none of us a Santa, reading his mail, hand-written by the needy — —
maybe from a harried single parent supporting one child or too many on too little. Plenty of lists are also composed by the greedy, demanding heaps of brand-name items because no substitutes will do, especially if strangers will be paying for the windfall.

These boxes, heavy with requests, are shuffled through as people search for one or two that seem sincere or too depressing to ignore. Like a phantom playing hard to get as if it knew a sad “Dear Saint Nick” letter is a heart-tug that holds your imagination and doesn't let go.

Nobody's here to judge, just to spread yuletide cheer to friends they haven't met. Because it's better to give than be in the box, where heaps of correspondence winks, thinking pick me.

Minutes pass. An hour. The Santa shift continues: merits are considered and believers are suspended on a sea rocked by magic wands. Unlike at Macy's where eight official red suits are paid, set up in identical rooms to chat with a line of boys and girls, invoking that old Santa clause of "I want..." but receiving only his smiles and crisp photos (paid for in advance).

No, here in an unadorned room, unseen ships come in, nets go out to rescue unvoiced dreams in the city that never sleeps, even though the physical bodies, like beliefs, are hidden and no thanks are bidden — — just your generous gesture, a stand-in for your hug and smiles.

Adopt a letter, two or three. When you are sufficiently moved, you leave. Soon another fills your wooden chair, awaiting divine disclosure. As you read, a narrative web draws you in and defines you as its giver.

In the dusty bottom of a box, a slim white lasso of a letter reaches out for me.

She doesn't ask for anything before she first apologizes for requesting Santa Claus's time, for being a bother, taking him away from more important things. She asks him not to tell a soul she wrote since her mother will get mad that she used a postage stamp without permission. She apologizes for about a dozen things no one should apologize for, then admits she's never had a Christmas tree because Mamma says they make a mess, although it would be fun to decorate. A neighbor let her once. She's never been to Macy's Toyland for a visit but hopes he doesn't mind because it wasn't her fault, and she'd really like to come, to have her picture taken with dear Santa. Then she asks if he loves her anyway — — because he never visits on Christmas Eve and maybe he's put off by the steel window gates that bar their fire-escape. In pictures, he comes down a chimney but their building on East Fourteenth Street doesn't have them, and she's sorry they're making it so difficult for him to get in.

Every other letter writer had specified brand-named goods, models, colors, preferences. But her wants are small: "Santa, please, send me toys — — any toys. I don't care — — please, anything at all!"

Something nicked my heart, like the thinnest of blades, a feeling of wanting much more for this child than toys, while wishing I were someone with official rights, a guardian who could really make a difference, not just once, when I'd rather transport her far away, so many miles, away from this place where she shouldn't be at all.

Part of me is imagining what I will buy today, no expense spared. By the weekend this babe will be in toyland, surrounded, dwarfed by a dozen gifts, all tagged by Santa Claus, reminding her she's good and loved, although some years his reindeers couldn't get in.

Part of me is thinking of her mother, another one of the “women of the without” who authorize pain like a blueprint on their children's skin, perhaps for no more reason than because a cub must know its kin the way some species know the heaven of tribe, family, and embrace the joyful resurrection of a childhood in memory, or of the re-born body we seek in new love's eyes. This city's full of women who bear children and the children who must bear with them.

Each time the news describes dark mischief in this girl's vicinity I'll wonder, and especially when she's old enough but still not asking for what she wants, taking anything at all.

In my mind we'll meet, maybe on a highway where she's thumbing a ride, hoping to go far away from New York City, any miles at all, where the only towers she'll see are those generous pastel scoops of ice cream on a cone as she changes her perspective on the wild animal safari that was childhood, where prey is always on the move, on the look-out.

Now, instead, she has her hand out.  I pick her up.  Then together we'll travel to the somewhere in the song, where yesterday might slowly smoothen out, be leveled by impartial hands called distance.
​ 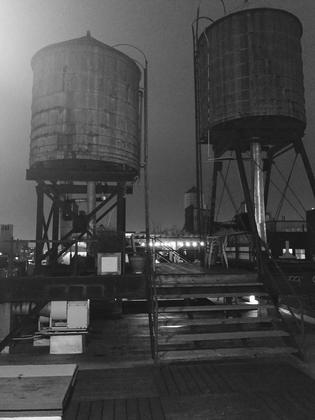