Gay Pasley's photography and writing seek to capture the under-reported experiences and challenges of what it is to be a working class woman of color.
​

“Gay, I think you should really, really cut your hair low. Bald, even. Bald is sexy. I really think you could pull that off.”
Austin is Oklahoma’s kickboxing champion and has a black belt in karate. He is my friend’s thirty-year-old son. I gave up smoking years ago, but things are stressful, and so when he offered a smoke, I said yes.
His mother, who is my friend Angie, says, “Not bald. Maybe just shave the sides down low.”
“No, bald,” Austin says as he shakes his head up and down at me and smiles.
“Really?” I ask.
“Yes,” he says. Then he Googles “bald black women” and “women with TWAs” (teeny weenie afros). I think that’s really interesting, since I have just had a conversation with his mother about his preference for white women. 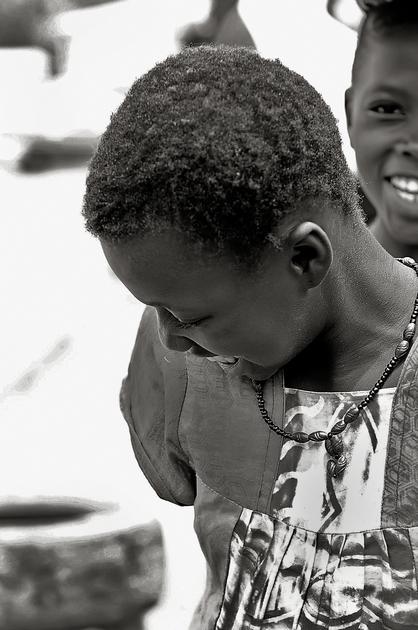 As a child, the worst insult imparted upon me was that I was “black and baldheaded.” It would reduce me to tears because it was true. I was black and my hair was very, very short. I am what you call nappy headed. My hair was too short for the hot ironing comb. And it was proclaimed in more than one North Tulsa black beauty shop that I had bad hair. I was a challenge. My Saturday morning is torture.
I have an established beautician, like most black girls do. I spend my entire Saturday after dance class in the beauty shop. This is to make me presentable for church on Sunday. Pressing my hair straight with a hot comb sweats out too easy and I get burns. As soon as I get home from dance class, I want to practice my handstands and back flips and standing on my head.
My hair resists. I am a black child who lives in America. I have working class parents. I eat three healthy meals a day. Vitamins. I have my own personal hair grower.  My head is routinely massaged and oiled, but I sleep wild, and any scarf that is tied on my head is lost and most nights never to be found. The white dentist says most little black girls he sees have long hair. I have tight, black, wiry coils that lay close to my scalp. My mother thanks him and we leave.
My rite of passage. My kindergarten pictures. My hair must be straightened with lye. My ears are coated with Vaseline. The lye is applied to my scalp. “Leave it for as long as you can so you can be pretty.” My five-year-old scalp bears the pain. Tears roll down my face. I am disappointed. What is it that I expect to see? Light skin. Long hair. I don't have ponytails. I have pigtails and first- and second-degree burns. “It's okay. They will heal if we put a little medicine on it.” I'm barely able to put the ends of my hair in pigtails. A tiny tuft of hair, and not the adorable Afro Puffs. I barely have enough to put stretch into a rubber band.
The little boys on the playground don't chase me. I am too black. An African. We had been raised to think that Africans were barbarians and that we were living in the land of the free and brave. They live in huts and eat bananas. They appear in Tarzan movies. To be African was considered a bad thing. To be bald headed or nappy headed was too.
I recall seeing a sculpture of an African woman. Her hair is shaved low and close to her head. I promise myself as a child that when I grow up, I will go to Africa and find women who and girls who look like me. I will find my tribe. I long for Africa. I look at maps and wonder where my African ancestor was kidnapped from. I want to see me. But it used to be impossible to know where your ancestor had been kidnapped from until Dr. Henry Louis Gates began his research. I am fascinated with the science but assume that it is far too expensive for me. After reconnecting with my father's family, I learned that a cousin, Dr. Cher Atkinson, has done the research. We descended from the Temne tribe of Sierra Leone. I plan my trip to the country. This is soon after my divorce, around the time I pick up my camera for the first time. It takes five years to raise the money. The organization changes hands. I begin to wonder if I will ever get to go. I persevere despite the obstacles. Years pass, and eventually, wearing a fitted black dress, I arrive in Sierra Leone, West Africa.
I am at the market and the African children are rejecting me. They do not run from the European students who are snapping their pictures with cell phones. Just me. The white Europeans are embarrassed and ashamed for me. Suddenly, I feel a tug on the back of my shirt. I turn around to see one little fellow. He is in rags. He puts down the container full of corn that he has carried on his head. He throws his hands behind his head. He says, “Snap fa me.” He isn't very cute, but he is beautiful. I get down on eye level with him. He gives me the most brilliant grin and throws his arms behind his head. I take his picture. The children are finally accepting me. She is the next child to jump in front of my camera. I see her and I gasp in awe. I say, “Oh my God, you are beautiful. Oh my God, you look like me.” She is dark. Her hair is black and the texture of wool.  Her hair is coiled tightly to her head. She looks down and smiles, and redness comes to her cheeks as she blushes. I found myself in Africa.
Later, at my first exhibit, my Caribbean godmother, who was the first to hold me when I was born, examines the picture closely.
“Oh my! Look at her ears. She looks just like you.”
I call the image of this beautiful African girl who looks so much like me African Blush. This is another one of the many ways I find myself in Sierra Leone, West Africa.