Mrs Davis sat at the kitchen table. She was not cooking or cleaning or doing laundry; she was just sitting. She sat looking at an envelope that had come from the war office, delivered by hand. It had come just after midday, just after she had made tea. The pot stood untouched on the table, cold. Mrs Davis could not say what was in the envelope, but she could guess. It was that thought that stopped her every time she went to take the envelope and open it.

Her daughter, Mary, arrived home from school just before four o’clock. The school was at the end of the road, but it had been a nice day, so she had taken her time coming home. She had been playing with her friends and came into the house laughing and running.

David lives in Scotland. He loves stories that exist just below the surface of things, like deep water.
He has most recently had work published in The Horror Tree ( Five Letters to Santa), Locust (Happy Ghosts),  Rosetta Maleficarium (Blackbirds), Short Tale 100 (A Hard Blessing) and 50 Word Storie (Down the plug hole). You can read more at  Davidrae-stories.com.

“Hush,” said Mrs Davis. That was all she said. She never asked Mary how school was, or if she was hungry or if she had homework to do. Mary stopped and looked. She could see the envelope on the table and Mrs Davis staring at it. It was as if Mary wasn’t there. All of Mrs Davis attention was given to the envelope.

Mary ran over to Mrs Wilson next door. “There’s been a letter,” she said. That was all she said. Mrs Wilson looked at Mr Wilson and they nodded to each other.

Mrs Wilson let herself in. Mrs Davis never spoke when Mrs Wilson entered. Instead, she seemed to be a figure made of wax or wood, stiff and not breathing.

“You need to open it,” said Mrs Wilson. Not a flicker passed over Mrs Davis’ face.

“Do you want me to open it for you?” asked Mrs Wilson. Mrs Davis instantly grabbed the letter before Mrs Wilson could even touch it.

Mrs Wilson could excuse Mrs Davis’ rudeness in the circumstances. “Shouldn’t you open it?” she asked again. Mrs Davis tore open the envelope then pushed the letter into Mrs Wilson’s hand.

“You read it,” she said, covering her eyes.

Mrs Wilson read it to herself; missing in action.  What kind of a thing was that she thought; missing where and how long, and why. It told you nothing. Her voice shook as she read it aloud and when she did Mrs Davis began to sob, her hands still placed over her eyes.

“Where is he?” said Mrs Davis, “How could they have lost my John? Is he lying out somewhere in no man’s land wounded, or captured, or . . . “ She could not say it. Just to say it would be to make it real; dead. She would not say the word. It would be a betrayal. It was a betrayal just to think it.

Mrs Wilson knew better than to say it would be alright, that he had probably got lost and joined up with another unit, or to say that perhaps he was with the wounded and they’d find him when they checked his papers, or to say that maybe he’d been captured. She knew better than to say, at least he’s not dead because he almost certainly was. John Davis, her neighbour, dead. It made her sick to think of it.

Mrs Wilson knew better than to say anything. She went back next door. Mary was still there.

“You should stay here tonight,” said Mrs Wilson kindly. She had no children; Mr Wilson had health problems; that’s why they wouldn’t let him enlist.

The next day, Mrs Davis was still sitting at her kitchen table when Mrs Wilson came round.  The fire was out. It looked as if Mrs Davis had not moved since yesterday. The teapot was still on the table colder than ever.

“Let me clear these things away,” said Mrs Wilson.

That stopped Mrs Wilson, for a bit. “No, of course, he’s not,” she said and went back to clearing up the tea.

The next day, Mrs Wilson saw Mrs Davis walking past her house. “I wonder where she’s going,” she thought.  But she found out soon enough. There was a troop coming in at the station. Mrs Davis had gone and stood on the platform shouting “John, John Davis, has anyone seen John Davis.” She had stayed there until the very last soldier had gone.

“I better go through,” Mrs Wilson said to Mr Wilson. When she did, Mrs Davis was back sitting at the table doing nothing.

Mrs Wilson didn’t know what to do. Mr Wilson said they should call the doctor. When he came round he said that Mrs Davis was in shock most likely and  they should keep an eye on her.

“That’s what we have been doing,” said Mrs Davis.

The doctor left and handed Mrs Wilson some pills for Mrs Davis. “Give her these if she needs them.”

“How will we know if she needs them,” Mr Wilson asked. “A woman knows,” thought Mrs Wilson.

For the rest of the war, every day, Mrs Davis would go down to the train station looking for her husband then come back and sit. Her house was neglected. She hardly ever cooked or cleaned or did laundry or looked after her child. Sometimes Mrs Davis would get hysterical, and then Mrs Wilson would give Mrs Davis some of the pills that the doctor had given her.  That would calm her down for a bit.  But no amount of pills would stop Mrs Davis heading down to the train station every day.

It made no real difference to Mrs Davis.  She would still go down to the train station asking for her husband. Mrs Wilson tried to stop her. But still Mrs Davis went every day.

The troops were all almost home now, there was just one more train coming through the station.

They arrived just before the train stopped at the station. The troops formed up and started marching off to the barracks. Mrs Davis shouted at them “Is John Davis there? I’m looking for John Davis.”

“I’m John Davis if you like,” shouted back one of the soldiers with a leer.

One of the other men punched the soldier that had shouted in the mouth. The other soldiers quieted the man down and they went on their way.

“Can’t you see she’s touched,” one of them said. “That could be your wife or mine.”

“We should be going home,” said Mrs Wilson.

But Mrs Davis wouldn’t go home. Mrs Wilson couldn’t just leave her. Mr Wilson would look after Mary, so they could wait.

Then, Mrs Davis stepped forward. Mrs Wilson was worried she was going to do something rash, like jump onto the track. But instead, Mrs Davis stopped and seemed to be muttering. She was standing in the darkest part of the station. In the gloom, it looked as if there was the figure of a man there. Mrs Wilson knew it was just a trick of the light. It was probably just a shadow but is seemed as if Mrs Wilson could hear a man’s voice.

After that, Mrs Davis headed home. She seemed back to normal. When they got home, Mrs Davis asked Mrs Wilson in for a cup of tea, and when Mrs Wilson offered to look after Mary, Mrs Davis said no, she could manage, but thanks anyway for all the kindness that Mrs Wilson had shown her.

The next day, Mary came round after school.

“I’m not sure,” replied Mary. “I think you better come round and see.”

Mrs Wilson went round. Mrs Davis seemed very cheerful. There was a letter on the kitchen table. It was opened. Of course, it was none of Mrs Wilson’s business, but . . . Killed in action.

It never said where or when or how, just “killed in action.” What did that mean? Mrs Wilson hated to think, but it meant no body found. Poor Mr Davis blown to bits he must have been. Now that the war was over, the war office was spending lots of time trying to sort out who died where and when, and to put all the bodies they could find into graves and find out who they belonged to. There were some bodies with no names, and some names with no bodies; lots of names and lots of bodies. That was John Davis, a name with no body and maybe a body with no name, lying in an unmarked grave somewhere.

It made no difference to Mrs Davis. She still seemed cheerful.

“Did you read this?” asked Mrs Wilson.

“What do they know,” said Mrs Davis.

Mrs Davis was busy moving things and putting things into a case.

“What are you doing?” asked Mrs Wilson.

“I’m going to meet him,” said Mrs Davis, “He told me where to come. Last night, remember, you were there.”

“You should take some pills. . .” But Mrs Wilson had been there. “Where are you going?”

At first, Mrs Davis looked confused, but then it seemed as if she was listening to someone speaking.

Mrs Wilson sat down. She could feel herself shaking. It was as if all the air in the kitchen had been sucked out.. She could see now that Mrs Davis was packing up her clothes and her photographs of her husband, and some of his old clothes. She was putting them into two suitcases. She was packing up everything that was left of John Davis and most of what was left of Mrs Davis. Two suitcases, that is all there was.

Mrs Davis hadn’t packed any of Mary’s things. Mary’s clothes were still hanging up to dry, and her toys were still stacked in the box in the corner.

“Do you want me to look after Mary while you’re gone?” said Mrs Wilson, her voice a mixture of hope and despair.

Mrs Davis stopped and once again she seemed to be listening to someone. 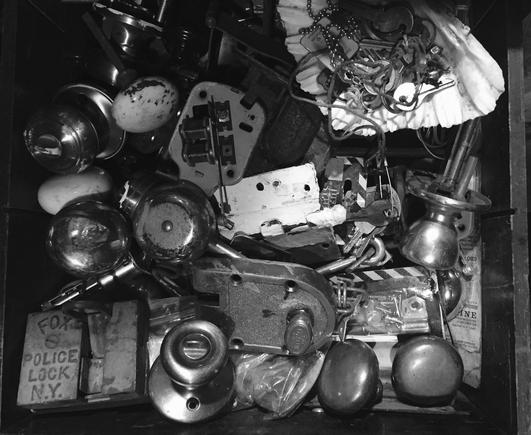