1.
Good is an overused word. Good food, good times, good girl. Good is something we always expect, yet rarely find.
But good is the reason I loved her. I'd never met anyone who flung about her goodness so carelessly. It was like she'd somehow skipped that stage of childhood when we all learn to hide our earnestness behind sunglasses, to avoid being laughed at. (Hey goody-two-shoes!)
Don't get me wrong. She was human, too. She relished trashy television and sometimes splashed around idle gossip, and in these moments her pettiness stood out all the more because it was so out of character, and thus more deserving of judgment, somehow. We were all guilty of judging her, when she so rarely judged us.
​

Her goodness would have been easier to make fun of had she not been so lovely, but she was. Not just lovely. She was a goddess. She stood so tall among the rest of us that I literally looked up to her. Her flaxen hair hung behind her like a cape.
She'd been homecoming queen in high school and graduated summa cum laude from Northwestern before turning to architecture, landing a prestigious internship at SOM the spring after we met (though she never did make it to the program.) All these things should have made me hate her. But instead I ended up loving her.

2.
The first time I saw her, I was waiting in line to buy a sandwich at the Merchandise Mart in Chicago. It was the first day of graduate school; we'd spent the morning cycling through classrooms, introducing ourselves to our TAs, and choosing which seats to stake out for the semester before being unceremoniously dumped at a nearby shopping mall for lunch.
It was a small program—there were maybe twenty of us altogether. A transplant from New York, I stood apart, my face consciously contorted to show condescension at the easy midwestern friendliness of the other students. Some of them seemed to have bonded already, their camaraderie as taken for granted as their straight hair and stadium cloth J.Crew coats. She stood in the middle of this crowd like a blonde stamen among her lily-white friends. I didn’t smile when she spotted me and moved into my line.
"Hi! Don't you sit across from me in Studio?" She held out her hand, which rested casually at the end of an impossibly long forearm. "I'm Eloise. But call me Ellie."
"Marisa."
"Marí-sa." Ellie rolled the word in her mouth and flashed me a smile. Like her forearm, her teeth were impossible. Glossy white, with rounded edges, they formed two rows in her mouth like soldiers guarding a privilege I already knew not to take. "Where are you from, Marisa? I mean, I love your name. Am I pronouncing it right?"
I narrowed my eyes. "The Bronx. New York. You know, the hood?" I didn't smile; there was no way my snaggle teeth could compete with hers. Instead I stretched my lips closed as soon as I could push the words out.
"Oh! I don't know much about the hood." She stepped back, but then, blinking Disney bright, smiled again. "But I do know Jenny from the block!"
Her childlike laugh broke the tension. I laughed despite myself, and seeing that she could make me laugh made her laugh harder. That was how it began.

3.
Not everyone accepted me as easily as Ellie. I know, now, that their aggression was as much about their insecurity as it was about my peculiarity. But back then I only knew the shame of not knowing the right way to pronounce chic or touché or Hermès, or that a regatta was a boat race and not a dance move. Architecture is a field that draws old—or at least upper middle class—money. My unexpected appearance came about through a dedicated teacher at PS.131, a rarity in itself, and a full scholarship to NYU.
NYU had taught me about Calatrava and Hadid and Gehry, but it didn't teach me how to unroll my R's or straighten my hair, or reduce the amount of make-up I smeared on each morning. Each Friday night I'd take the 456 uptown to go clubbing with my esas and hainas in our falsies and hoochie heels. I never had a friend who was a natural blonde until I met Ellie.
But Chicago was a town of blondes. Ellie wore white Keds and drank chardonnay and knew which football team made the playoffs each season. I had to wear heels just to make eye contact with my classmates, most of whom were nice, if a bit awkward, around me.
Josette was not so nice. She said, "Hey Marisa, can you say bousillage again," or, pointing at my nails, "Wow, can you really type with those on?"
One winter night Ellie found me crouched between Josette's boyfriend's legs. We were in a spare bedroom at one of those house parties we went to en famille studio every weekend before returning, exhausted and drunk, to our drafting boards. Ellie, having arrived late, later told me she'd been trying to find the coat closet. The three of us looked at each other for a breathless moment before Ellie widened her eyes at me in exasperation, put a finger to her lips, and closed the door. I finished him off, grabbed my scarf from the floor, and left.

4.
She was too good to just let it go. You don't have to do that, she said, you are loved. Or, you only have to be you to be happy. Her parents had gotten divorced when she was in junior high, and she'd spent a lot of time in therapy.
I didn't tell her that I hadn't done it to be happy, but to make Josette unhappy. Unlike Ellie's parents, who had remarried but vacationed with extended groups of WASPY stepchildren at their lake house or in the Virgin Islands, my parents had made a point of staying together and settling into a life of bitter resentment. Happiness wasn't an option for people like me.
One day in May Ellie woke up unable to see from her left eye. When she was diagnosed with multiple sclerosis a week later, she told me her years of therapy had taught her acceptance.
I almost broke my toe kicking a hole in the wall because of course this happened to my only friend in Chicago. But Ellie just sat there in her white Keds, smiling at me with her head turned sideways so she could see my reaction with her right eye.
"I recommended you to take over my internship at SOM."
"What? You didn't! They don't want me. I don't deserve it!"
"It's only fair, Marisa. You do deserve it. They need more people with talent like yours."
By talent like mine she meant skin and hair and accent like mine. Despite the deep unfairness of what was happening to her, she still believed in this idea of cosmic fairness. I think she saw herself as an avenger of some sort, a Robinhood who could right the world even if it seemed hell bent on wronging her.

5.
Ellie did okay until a couple of years ago. She liked to look over my renderings. At the end she would run her fingers over my architectural models before giving me a critique; by then her trembling hands had become more perceptive than her eyes.
She couldn't finish the program, but her mom brought her to graduation. When I saw the thin blonde woman in a St. John's knit who pushed Ellie's wheelchair into the auditorium, the same word floated into my mind as when I'd first met her: privilege.
Ellie's blonde hair and straight white teeth were her privilege. Her therapy and loving mother and ease with her fate were her privilege. The surprise twist of our plot is that her privilege delivered not her, but me, to this interior cubical in a glass tower overlooking Michigan Avenue. Sometimes I step up to the window and run my fingers through my flat-ironed hair, let the eastern sun warm my face.
When I told her I would take her internship Ellie had nodded. "You deserve it Marisa," she'd whispered.

6.
I am here now. In the hallways, I hear laughter behind my back that stops when I stop walking and I don't know if it's my accent or my ideas or the skirted suit that looked great in the dressing room but is maybe shorter than Ellie would've chosen.
I am here now. Ellie's goodness got me here. Even if I can't find it ever again, I try each day to be good, as good as Ellie was, but I know I wouldn’t be here if she hadn't gotten sick. What does good have to do with that?

Jenny’s writing has been published in print and online in Obra/Artifact, The Columbia East Asian Review, Bottlecap Press, 1888|Center, The New Engagement, and The Laurel Review, among others. She lives in San Francisco, where she is working on a novel set in Fukushima, Japan. www.jennyfanraj.com 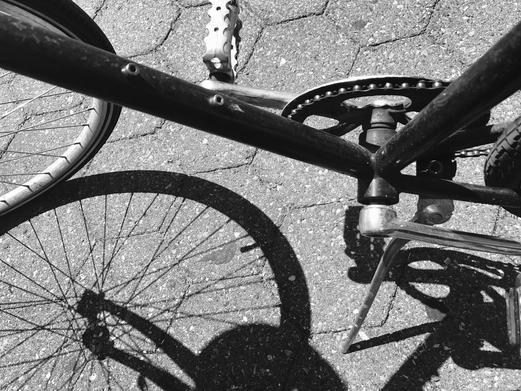