3t has an intimate relationship with a mountain rainforest in Southeast Puerto Rico, where she lives. There was nothing in life that prepared 3t for the force of a savage dog attack in 2017, and weeks later, the force of Hurricane Maria after Hurricane Irma. Ongoing in the time of the dog attack, the painting  1 “Premonition” forewarned of something… these four drawtings, as 3t calls her work, are the result of events in a dramatic, dangerous, and dynamic universe:  2 “Facing The Storm”; 3 “Picking Up The Pieces”;  4 “Everything is Broken”; 5 “After Hurricane Maria”.
3t draws and paints every single day.

​A Climate of Painting: The Work of Thrity (3t) Vakil,   by Eben Wood

It’s easy to get lost in abstraction. That’s one of its pleasures, really, that it disorients, that it allows us to lose for some time the ways that our bodies, our senses, seem to anchor us in place. That anchoring’s important too. To have our feet firmly planted in both time and space, I mean, and by doing so remember that we’re nomads.

I’d already spent some time with Thrity at Las Casas de la Selva (the Houses of the Forest), a one-thousand acre sustainable forestry project in Patillas, Puerto Rico, a forest that she has lived in and cared for, for twenty years, when I began to understand her work as a painter. It was the paintings themselves that I saw at first, before I knew that she’d made them, hung here and there in the main building on the property, a concrete structure, partially set into the hillside and containing several rooms, including the kitchen, fronting the valley below with a roofed concrete patio that is a combination dining, living, and gathering space. They were striking, those paintings, like thickets both spiky and sweeping and giving way to (or maybe overlaid with) glimpses of deeper fields, the palette somber and arresting at the same time. It was their abstraction, their rhythm of form and gesture, that made them images of the very place where I saw them. Not because they looked like that place, although (as we do when we relax our rational minds and follow passing clouds) you could see all kinds of shapes, all kinds of things in them, but because they seemed to capture both its skin and its essential interconnectedness as structure or system.

I first went to Las Casas about four months after back-to-back hurricanes, Irma and Maria, devastated the island in August-September 2017. The damage was everywhere visible, in the buildings of Las Casas—the fractured patio roof and those of many other structures still covered with flapping blue tarpaulins—and in the forest, its canopy stripped away and the ground still densely littered with fallen limbs and trunks. But it was still visible in the human survivors too, in their bodies and in their eyes and, on that first visit, in the fact that Thrity and Andrés had been forced to move down from the mountains to a gated community in Caguas, a small city about forty minutes north, toward San Juan. There was still much to be done toward recovery at that point, the recovery of the land and buildings of Las Casas, and of its human inhabitants. Much has happened since, as I’ve witnessed in two subsequent trips, and much remains to be done. Not to heal that place—the forest preserve as well as the island around it—by returning it to what it was, for it has been changed, but to bring both skin and system into a new relationship, one that assimilates that trauma without being consumed by it.

The land in the rainforested mountains above Puerto Rico’s southeast coast was bought in the early 1980s by the Institute of Ecotechnics. The institute is based in Santa Fe, New Mexico but has a network of participants, researchers and searchers, and properties or projects—each rooted in the specific biome or social space in which it’s located—that literally spans the globe. The work of maintenance, nurturing, and transformation that each place or project represents, whether it’s the October Gallery in London or Santa Fe’s Synergia Ranch, the ocean research vessel Heraclitus, or the second-growth mahogany and other hardwoods of Las Casas, contributes to a holistic understanding of the whole biosphere in which we live, Planet Earth. It was this last term that gave its name to the Institute’s best-known project, Biosphere 2, in which a three and a half-acre structure in the Arizona desert functioned as a model of the planet as a closed ecological system, complete with seven distinct biomes: five natural (rainforest, ocean with coral reef, mangrove wetlands, savannah, desert) and two human or anthropogenic (agricultural areas and crew living quarters). A team of scientists, researchers, and technicians spent two years living in this more-or-less completely self-sustaining habitat, with implications both for our understanding of global ecology as well as for sustained interplanetary travel or settlement.

And Thrity has her own history; her birth in Nairobi, Kenya, to a Zoroastrian family that moved from Iran to India and then Zanzibar, and that family’s migration to Great Britain, her work in theater-design and scenic-art, and in the early nineties, as a dynamic vector in the boundary-pushing UK shamanic dance/rave scene as an ambient architect. Then her decisive introduction to the Institute of Ecotechnic’s vision through the October Gallery, and her even more decisive departure from London to join the crew of the institute’s ferro-cement, Chinese junk-rigged research vessel, the Heraclitus. That was a voyage of some years, circling the globe conducting coral reef research, which she finally left to live and work at the institute’s headquarters, Synergia Ranch, in New Mexico, where she was introduced to plant husbandry. From there she came to Las Casas. Thrity’s story is very much her own to tell, but I think some of the searching visible in her life’s voyage, the exceptionally dense weave of perennial philosophy—not dogmatic but restlessly inquisitive—and specific, encyclopedic familiarity with the flora and fauna of the Puerto Rican mountain rainforest, the desire to realize human expression and creativity in all its lived forms through a recognition of our role in the biosphere, all of this is visible in her paintings if we learn again how to look. The images that it is our privilege to include here are of course only a partial gesture to the paintings themselves, unmediated, and to the place in which these paintings are made, their living and equally unmediated context.

Learning to look again, that is, in a process that is never finished but is rather the restless and continuous casting of glances, glance after glance, through what we know, what is familiar and therefore finished or frozen, the trauma that has defined the world for so many if not all of us, to a space in which we realize once again how it is we live. 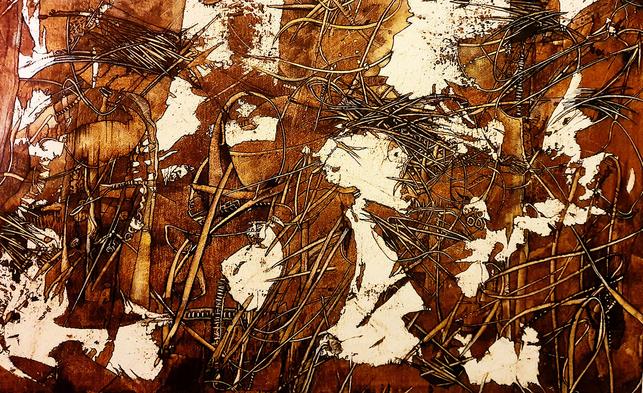 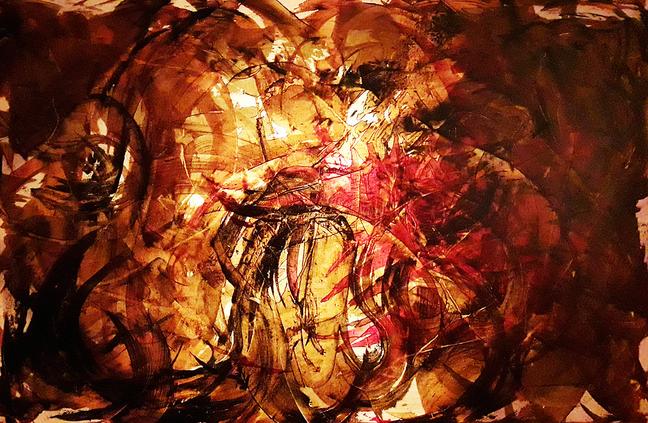 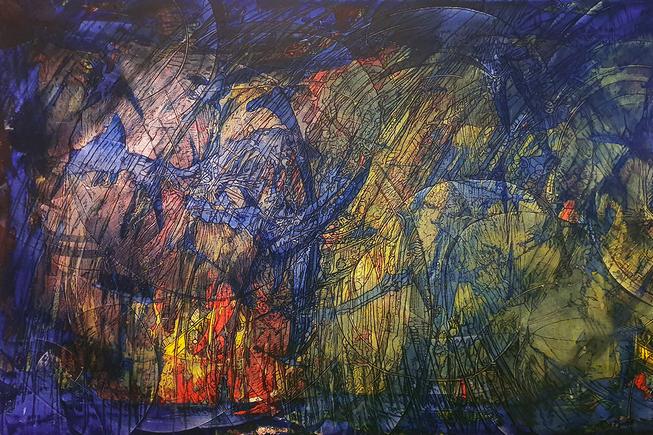 "Picking up the Pieces" 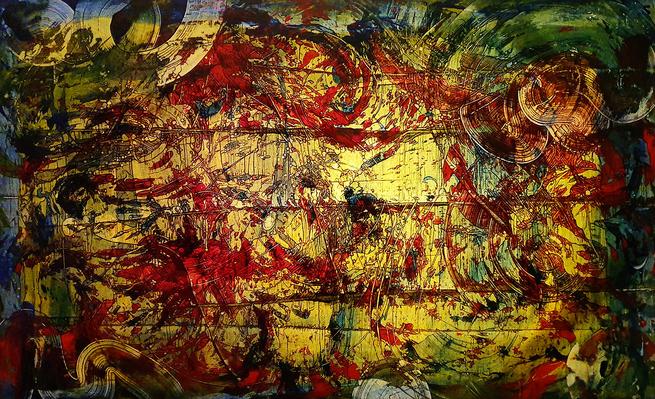 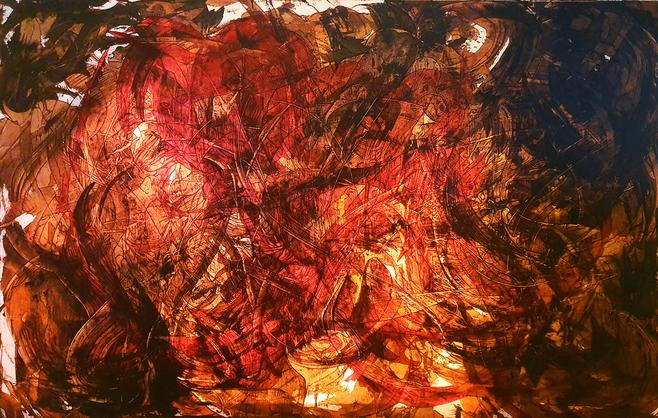