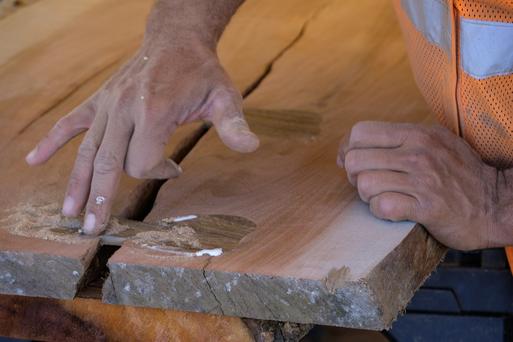 Back to Table of Contents


It was Job and all those boils that made me
sick in Sunday School class today, I had
to dash outside our portable building
and throw up to the side of our wooden
steps, two-by-fours they are, I know because
Father built them, he even donated
the lumber and nails and a Saturday
afternoon, which was the least he could do,
he's terrible about attending church,
he'd rather sleep late on Sunday mornings,
Mother too--they shut themselves up early
Saturday nights and I don't see them but
I hear them now and then, laughing and then
what sounds like crying and sometimes what sounds
like calling, like calling God, first Father
and then Mother and then I hear only
my own heatbeat, feel it I mean, it's like
being born again, maybe. Anyway
I represent the family at church and
after I threw up my cream of wheat and
two glasses of Tang--grape--I sat down on
the steps my father built until I heard
Miss Hooker coming to the door so I
turned around to greet her and she asked me
if I was feeling better and I said
Yes ma'am but you'd better not look, pointing
to my mess in the yard where the fescue
was just starting to come up, it rained all
last week but the sun came out for three days
and chased away the mud, that's a figure
of speech I guess, and Miss Hooker looked, I
must've tempted her, which is a sin but
I didn't mean to. I mean to say I
gave her the wretches. So I learned in class
today, outside the classroom, I should say,
that sometimes you stray when you don't want to,
you sin even though you weren't trying to
and that's how I got saved, there's more to wrong
than wanting to do it or not choosing
right. After class I told Miss Hooker so
and damned if she didn't start to cry and
call on God. So I guess we'll get married
when the time comes, I'm only 10 to her
25, unless she shuts the door on me.


Nobody loves me like Jesus loves me,
that's what Miss Hooker claims, she's my Sunday
School teacher so I guess that proves something
or at least it's good enough for me now,
I'm only 10, when I'm a teenager
maybe I'll complain and question a lot
more than I do now but for now I've got
no power except what cuteness gets me
and I don't have much if that as it is
so maybe it's a good time to get saved
so my immortal soul won't burn in Hell
forever and ever and ever and
then some. Heaven's the place to be is what
Miss Hooker swears and if I make it there,
which would take one Hell of a miracle,
my troubles are all behind me, living
and then my death but then I'm a free man
up in Beulah Land forever, that's if
I get saved. After Sunday School today

I explained to Miss Hooker that I like
to sin, that sinning's fun, and that if she
never has she should give it a whirl and
see what she thinks, she's already saved is
what I'm guessing so if she prays to be
forgiven after she does something bad
then she'll be kosher again. But she said
she couldn't do that, it would be tempting
God and that's a breaking a Commandment. So
then she asked me just what it is I like
so much about sinning and I told her
that sometimes it's good to stand up to God,
it kind of keeps Him honest, you let Him
know that you're willing to cooperate
but still you've got at least one eye on Him.
Then I'm damned if Miss Hooker didn't start
to cry. I had to help her into her
teacher-sized chair, adult-sized anyway,
and help her dry a few tears and with her
glasses off she's a sight to behold for
25 and not getting younger--I
almost kissed her but decided better
because that wouldn't have been a sin and
that's were the danger really is, when what's
good is even truer than what's wicked.
I mean that when you're found you're lost for good.

She threw me out of Sunday School today
did Miss Hooker, for chewing gum and when
she told me to spit it in the garbage
can I swallowed it instead--I was that
afraid, the feeling I'm going to have
when I die, I mean just after, and go
to Heaven to be judged, by God of course,
and maybe Jesus and the Holy Ghost,
too, and have to stand there before His throne
and wait on Him to hunt my name down in
the Book of Life, a catalog of folks
who never sinned, or only a little,
and got themselves forgiven in prayer,
and if I'm not in it then He'll send me
to Hell to burn forever--Hell, longer
than forever, eternity even.
She scared me almost enough to get saved
but then Miss Hooker told me to go out
in the hall and think about what I'd done
--for a sec I thought she told me to go
to Hell. So I did, went into the hall,
and waited and waited, she'd caught me half
-way through our one-hour lesson, and when she
set us free, my classmates anyway, she
invited me back in and warned me that
chewing gum's a sin, especially in
Sunday School class, and if I continue
to sin then when I die my soul will be
lost forever in the fiery depths
of Hell. Do you understand, she asked me.
I do, I said. And then she prayed for me
as she sat in her big wooden chair with
her eyes closed and me there before her and
I could've reached out to stroke her red hair
or finger a freckle or loosen her
collar, but I'm 10 to her 25
and she's not ready yet, she's still too young.


Where was I before I was born? Heaven
is what Miss Hooker says. She's my Sunday
School teacher and says I was a soul with
-out a body until God put me in
-to one. So where did my body come from?
She laughed and said to ask my parents when
I'm older. How much older, I asked. Ask
them that, too, she said. But ultimately,
she said, all things come from God, even things
that aren't really things. She's educated,
goes to vo-tech to study hairdressing,
but they call it cosmetology. Wow.
I thought that was the study of outer
space. It sure sounds like it. Nobody knows

anything, at least the things that count, like
where you were before you were born and where
you'll be after you die. Heaven or Hell
is what Miss Hooker says. But then she says
I came from Heaven in the beginning
but who can say I didn't come from Hell?
I asked Mother about it and she laughed.
I asked Father and he laughed louder and
then said Bingo. I got angry and yelled
You go to Heck, you old son of a gun,
which if it isn't swearing I don't know
what is, so he sent me to my room and
said he'd be up shortly but I guess he
forgot so I sneaked downstairs and caught him

in his La-Z-Boy again with Mother
on his lap and they were kissing as well
as two old people in their thirties can,
it was a little sad, and damned if I
didn't almost join them but instead crept
out to the porch to study outer space
and I named a bunch of pretty stars for
Miss Hooker. She's a constellation now
--if I tell her so will she sit on my lap?
I'm 10 to her 25, she might hurt
me but pain must be a part of love what
with Jesus dying on the Cross and
all. His mom was a virgin. Mine's not, I'll
bet, and I don't even know what it means.


In Sunday School today I damn near died
when Miss Hooker said that I have to, die
that is. I was glad she didn't mean right
then and there. I felt a little better
when she said, Later on, not a whole lot
but enough to get my legs working in
order to walk me home after the Lord's
Prayer and its Amen, which we shout
so loudly we can't ourselves shouting
it, at least I can't hear myself shouting
it, but what's good for me is good for my
classmates. And what's bad, too. That's fellowship,
I guess. I live about a mile from church
but walking home this time took longer than

usual and usually it seems
quicker than the trek there Sunday mornings.
Maybe I was hungry for Sunday lunch
or maybe I carried a load of death
with me going back. Miss Hooker preaches
that we all have burdens, even Jesus
did and He was the Son of God and that's
nothing to sneeze at. So when I got home
Mother and Father were in their places
at the kitchen table and smoking Trues
and slurping Sanka and waiting for me

to go to my room and change clothes and come
back down and fix lunch, that's one of my chores,
or maybe it's a burden, bacon and
eggs and toast, which they both like burnt,
the toast I mean, and the bacon crispy but
not too crispy, and the eggs over-scrambled
'til they're almost dry. I have the patience
to do all that, they say, and they don't, or
that's what they say without meaning it--I
don't know, but I get it done and serve them

but say Grace first, or I say it for us,
and they eat like horses, hungry horses
anyway. Then I clear the table and
do the dishes and then I'm a free man
even though I'm only 10. Then I go
upstairs to read comic books and do my
homework and read more comic books and fall
asleep and there's Miss Hooker, telling me
that I have to die one day and I say
Kiss me first, and she does, and then I do.


Miss Hooker loves me like nobody else
does except for maybe God and Jesus
and the Holy Ghost and my mother and
my dog so maybe I should marry her,
Miss Hooker I mean, when I'm old enough
--I'm only 10 now and she's 25,
which is still young as grownups go but not
by much. If I ask her when I'm 18
then she'll be 33, which is older
than Mother now but I'll be older, too,
so it won't bother me so much and that's
how old Jesus was when they crucified
Him, which means something, I'm not sure just what.
I'd ask Miss Hooker but if I let on
I love her that might spoil love for later.
After Sunday School today I did ask
--she's my teacher--if she had a boyfriend
and she looked out the window so quickly
that she made me look, too, but she didn't
say it--Made you look I mean. Then she
looked at me and said, Not anymore, so
maybe they broke up or he's dead or both.
And I almost asked her what happened but
this time I looked quickly out the window
and saw what she saw but I saw it first
so there. It looks a lot like nothing but
it's lost in the sunshine and the apple
tree and the blue sky. Look too long, you're lost.
I'm not sure if she looked twice. I have faith.