There was a house situated on the road I grew up on. It was Mr. Clapsaddle's house. Mr. Clapsaddle used to drive a beat up yellow station wagon - veerrrrry slowly down the road. As a young girl, if I happened to be up by the road when Clapsaddle rolled by, I would most often run - and I had ample time to do so. Clapsaddle's house was beat up and run down just like his car. I don't know how it came about -- maybe I was selling chocolates or collecting donations for something at school, but I remember knocking on his door one day. When he opened it, I could see the hallways were lined with buckets filled with things. There were newspapers stacked to the ceilings. Mr. Clapsaddle was a hoarder. He held onto things. For long periods of time. Forever. The police came to Clapsaddle's house one day, and due to the old farm equipment, unusable cars and junk scattered all over his plot of land, he was forced to do one of two things: Get rid of it all, or declare the house and land a private museum. Thus, Clapsaddle's house became a museum. He died some years later, and every time I head home to visit my parents I turn my head to look at the now vacant lot, rebought by the DeBuck family who run a sod farm in the area. What does hoarding mean? For me it represents anxiety. Loneliness. True attachment to material objects. He filled his house because there was a space within himself that never quite filled. The accumulation of materials never worked. It never could. They merely provided a resting place, a distraction - from really, the inevitable. We will die. (Not negative, just fact.) Driven from the fear of being human, it's easy to hold on to things. Objects can be teachers, but they can also be detrimental to our inner well being. As a painting belonging to the comfort and control series, this piece represents a temporary pacification that objects provide. R.I.P. Mr. Clapsaddle.

This is the story of two young girls who went into a Nigerian market on January 10th, 2015. The first one blew herself up. The second watched her and screamed, then blew herself up. All that was found were their upper torsos. Often young girls or boys are strapped with bombs and told to just go out into a crowded area and press a button, and they don't even know what they're doing it for, or why. It's really really tragic.
"It took place yesterday afternoon at an open market in the town that has frequently been targeted by the militant Islamist Boko Haram group.

A trader at the market, Sani Abdu, said: "I saw their dead bodies. They were two young girls of about 10 years of age...you only see the plaited hair and part of the upper torso.' The suicide bomb attack killed four people and wounded at least 26 people, according to witnesses."
http://www.theguardian.com/world/2015/jan/11/

​This is the veil of artist Don't Fret - one of my favorite artists out there. His disguise is imperative to his craft. 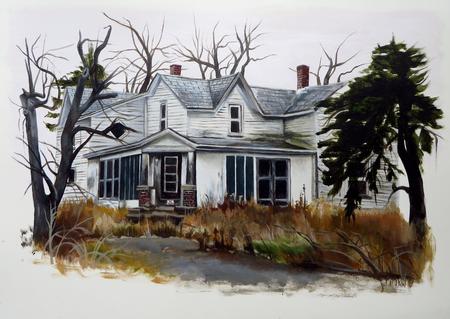 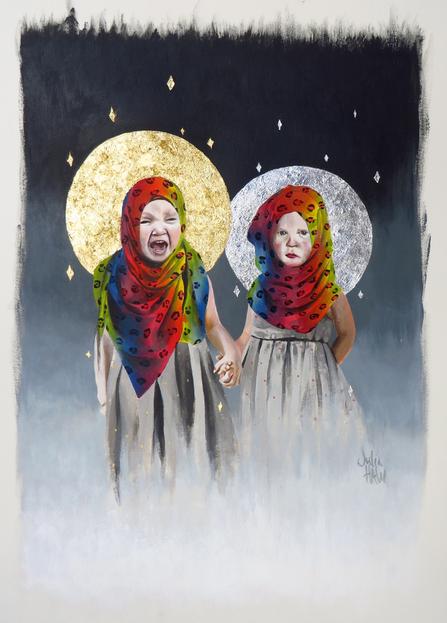 Often people resort to drugs, weed being the weakest of them all, for a mental veil.  I wanted to elevate weed for this piece, placing the regular paraphernalia on fine china dotted with pink roses.

"Four to Six" refers to the estimated amount, in MILLIONS, of unexploded ordinances still buried underneath Cambodian soil. Cambodia has some 40,000 amputees, one of the highest rates in the world. We were not taught this in school, but many of these landmines were placed by the United States.

I'd walk through the streets in Siem Reap or Phnom Penh, and see men dragging their legless bodies through the dirt. It's much more difficult to earn money without functioning limbs so many resort to selling bootleg books or simply begging. It's also difficult to receive proper care and up to date equipment. I'm thankful to see that as of last October, the International Committee of the Red Cross started delivering amputee equipment and repairs to hard to reach locations all over Cambodia.

When teaching art lessons with Colors of Cambodia in local Siem Reap schools last year, the teacher instructed us one morning to draw a family sitting around a table eating breakfast. Several of the family members were to be depicted without several limbs. The lesson was to educate that those who've had limbs blown off by ordinances are "just like you and me.”

"Ping Pong Champion of the World"

​
Julia Haw (b.1982) is an oil painter and writer living in Brooklyn, NY.  She received her education at Western Michigan University, and graduated in 2006 with a Bachelors degree in painting. Upon her move to Chicago in 2008, she worked as an assistant to artists Tony Fitzpatrick, Wesley Kimler, Steve Conrad, and Carlos Rolón, and managed the Thoma Art Collection for a year.  Haw works primarily in oil paint on cotton, and since 2006 has committed to addressing issues surrounding feminism, ageism, marginalized communities, intimacy, death, and overlooked societal “norms.”  Her paintings have encouraged thorough discussion and inquiry amongst viewers, bringing a sense of public forum forth.

Haw’s work has been exhibited internationally in Siem Reap and Phnom Penh, Cambodia, and in the U.S. at the Chicago Cultural Center, IL State Museum, P.S. 1 Biennale (New Orleans), and various other galleries located in Michigan, Illinois and Louisiana.

Haw has been invited as a lecturer at CUNY and recurring lecturer at Western Michigan University, and currently instructs workshops at The Art Students League of New York.
​ 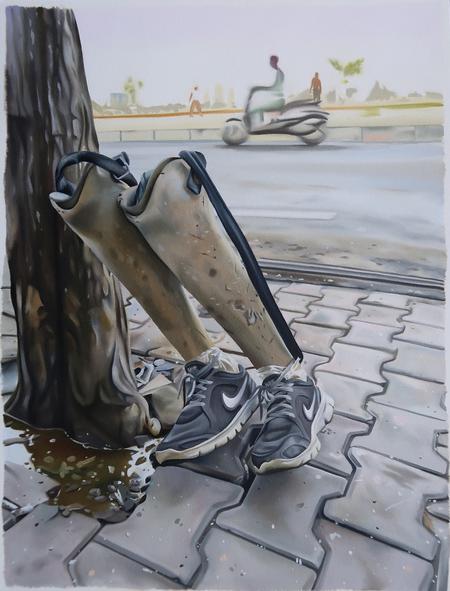 "Ping Pong Champion of the World"

This piece is in a body of paintings titled "Comfort and Control." The series concerns a tension, sometimes dark, sometimes humorous, between aspects/objects we seek in order to comfort ourselves, and pacify our desire to control aspects of life that are uncontrollable, mostly love and death. This is a man named Michael who runs a bookshop in Kalamazoo. I'd always spot him in thrift stores, wearing his usual windbreaker jacket and scouring the shelves for rare finds to add to his collection. When I visited the bookshop he'd talk my ear off (as he does with anyone) and would play me old VHS tapes of the days when he was a pingpong champion. It's organized chaos in that shop and I enjoy Michaels quirkiness, so I try to see him whenever I visit Kalamazoo. It's just rather hard to actually get out of the shop once he starts talking. 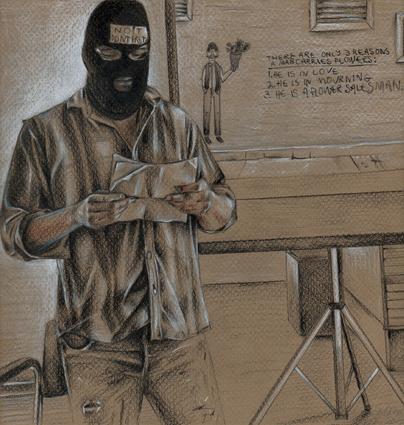 This is the story of a woman I knew in Byron Bay. She was deeply afflicted with pain that had led into severe drug addiction. The man who owned the house who we stayed with there, was helping her to clean up and giving her refuge for a few days in the apartment. One morning this woman and I were sitting on the porch - it was her birthday - and a random though popped into my head. "Mary Magdalene" it whispered.... I had NEVER once in my life consciously thought of Mary Magdalene and I made a mental note to look her up. I realized this woman was an inspiration and I needed to photograph her for this series. Drugs are used primarily as an escape from pain - a way to get to a familiar and comforted feeling. It is a way to control deeply unsettled feelings. When I did end up looking up Magdalene I read this: It is said that "seven demons were cast out of her." She was a repentant prostitute who became a saint and was the most commonly depicted woman aside of Virgin Mary. She is known for having long flowing hair commonly hid beneath a headdress or kerchief, often wearing contemporary or revealing clothing. (Do you see the uncanny similarity with this woman here, who I painted, in her actuality?)

Coincidences are guidances: I had never thought of Mary Magdalene before meeting this woman. This woman was martyr of her own afflictions. Yet she gave me divine inspiration. 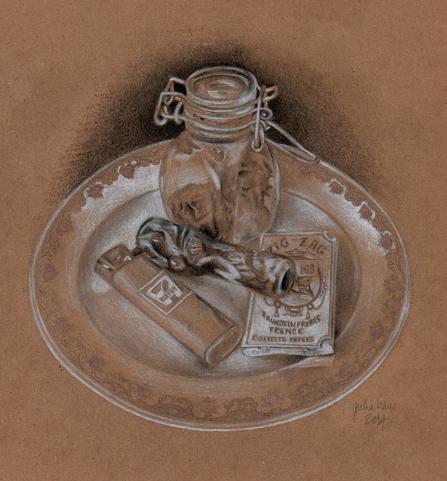 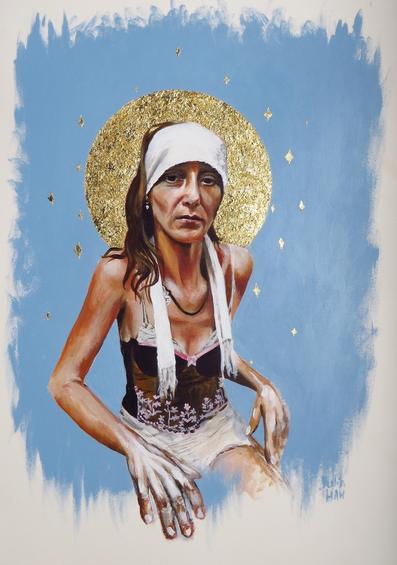 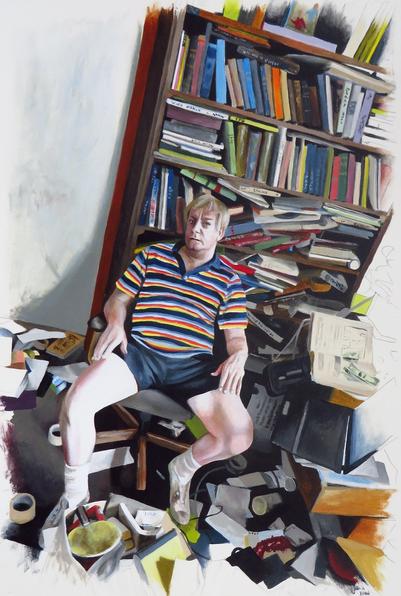 Click on images to expand in a new window.